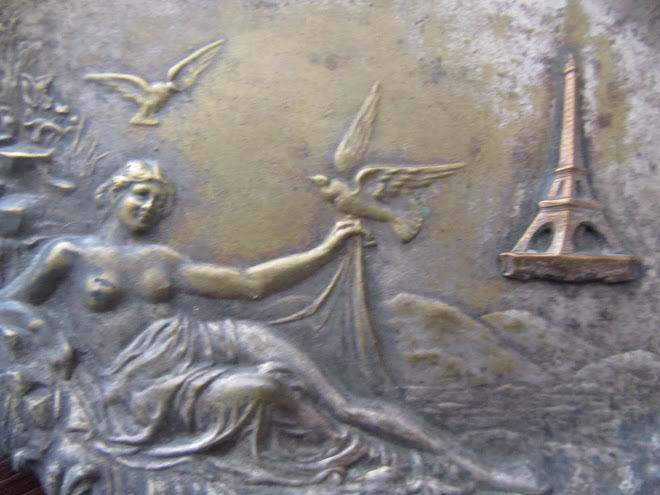 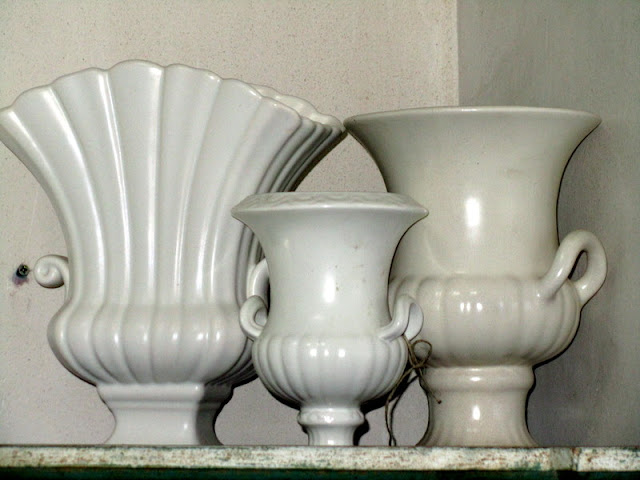 Sunday Morning, 7.30 am
and already the  cicadas are buzzing away, a definite sign of a very hot day in the making... 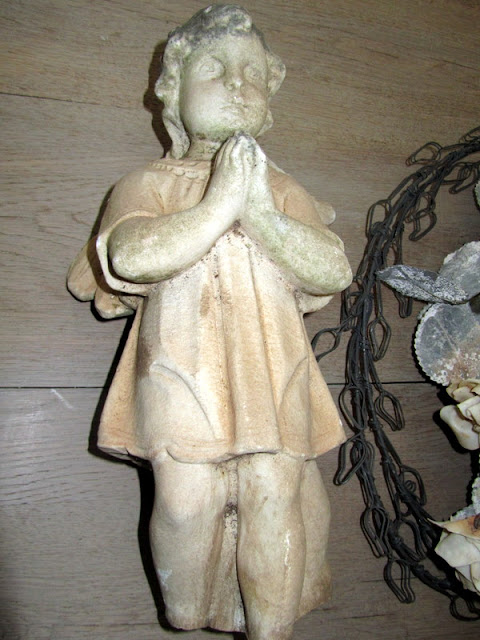 Because I have a need for quiet white this morning 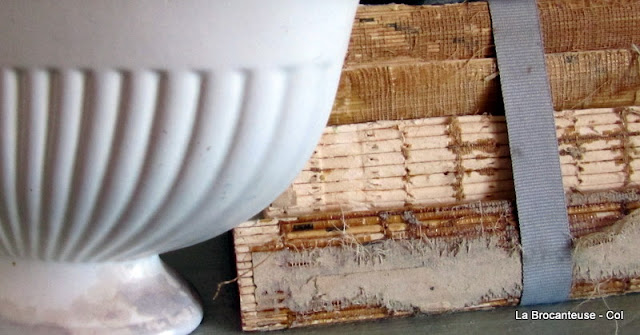 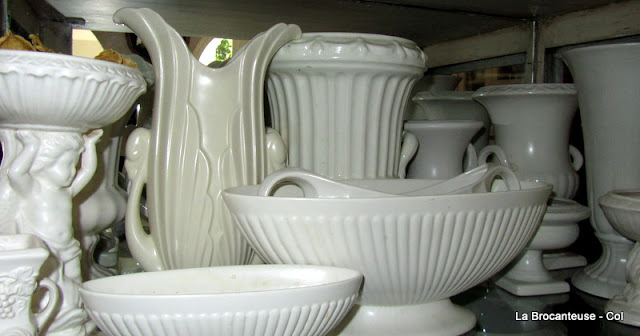 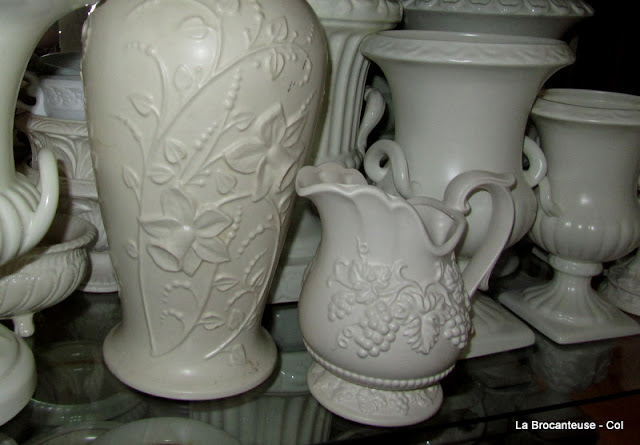 my white vases will come out  and I shall fill them with what I can find around the garden.
I like to group them together, filled with white flowers and  green foliage in different textures  around the house.. 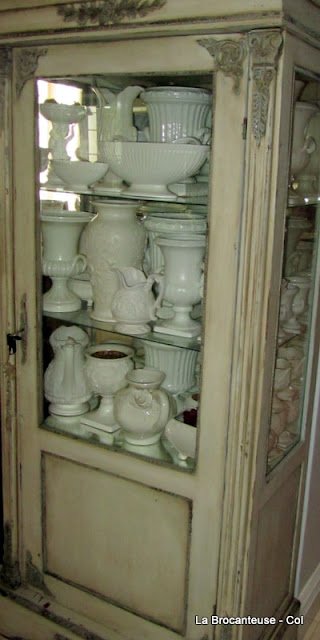 I started this post as one on white hues since it is so hot and I have a need for white around me...but the tjieeeeee is so loud , I had to found out... 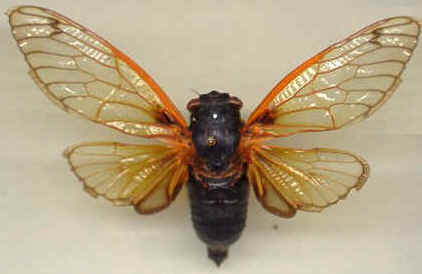 * Tjieeeeeee....
There are about 2,500 species of cicada around the world, and many of them remain unclassified.Cicadas are probably best known for their buzzing and clicking noises, which can be amplified by multitudes of insects into an overpowering hum.
* Cicadas live in temperate to tropical climates where they are among the most widely recognized of all insects, mainly due to their large size and unique sound. 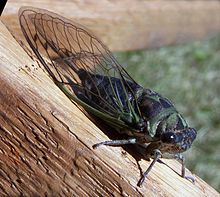 When young cicada nymphs hatch from their eggs, they dig themselves into the ground to suck the liquids of plant roots
...and then suddenly,after years underground,when they are ready to become adults,  these nymphs tunnel to the surface and crawl up on the side of the nearest object.
The skin splits down the middle of their back and they emerge to inflate and dry their wings.  This is done at night.
this is when they start to "sing"!
* and again...tjieeeeeeeeee...
How loud are cicadas?  Some have been measured at 100 decibels at 20 yards away, which is loud enough to be heard over a lawnmower!

* Only the males "sing"..(mostly)
Males produce this species-specific noise with vibrating membranes on their abdomens. The sounds vary widely and some species are more musical than others. Though cicada noises may sound alike to humans, the insects use different calls to express alarm or attract mates. 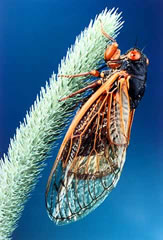 * Cicadas are often colloquially called locusts  although they are unrelated to true locusts, which are a kind of grasshopper. Cicadas are related to leaf hoppers and spittle bugs. 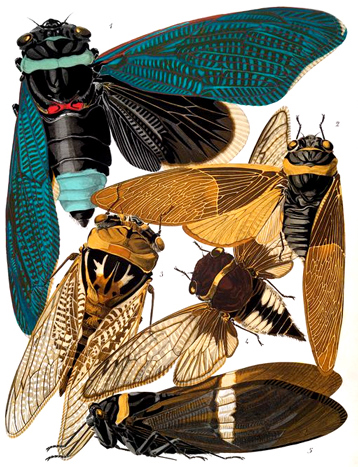 In Latin, cicada means “buzzer” and they buzz by vibrating membranes on their abdomens, which are mostly hollow and work as amplifiers. They modulate the buzz by angling it off the tree they’re perched on. Each species has its own song.
*  Cicadas are benign to humans under normal circumstances and do not bite or sting in a true sense, but may mistake a person's arm or other part of their body for a tree or plant limb and attempt to feed.
*********************

I find it sad in a way that by the time they begin to "sing" ..it is the end of their lifespan
This insect's amazing lifestyle has been a source of fascination since ancient times. Several cultures, such as the ancient Chinese, regarded these insects as powerful symbols of rebirth.

The Provence cicada has also become a symbol of vacation and happiness
It is considered a symbol of good luck in France when, if one wants to respect the tradition,
it is hung slanted outside,  by the main entrance door of the house. 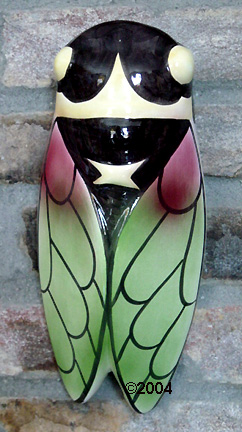 The most sought after being those made by the famous Vallauris pottery company and is hand painted. The Vallauris company became famous through Piccaso because that is where he made all his pottery.
Provence "ceramic cicada" was created in 1895 by a French sculptor/potter who was commissioned by a firm to create its company gift.
The idea came to him  after being inspired by poems by H. Fabre that  mentioned the Provence Cicada.
He came up with a Cicada paper weight resting an olive tree branch.
In 1900, he created the Wall Pocket shaped as a Cicada  which became thereafter a very popular subject.


I am in my garden today, perhaps I will be lucky enough to see a nymph that has emerged...
there sure is allot of calling for mates today..
isn't life wonderful!!
Colette
ready for some green in white 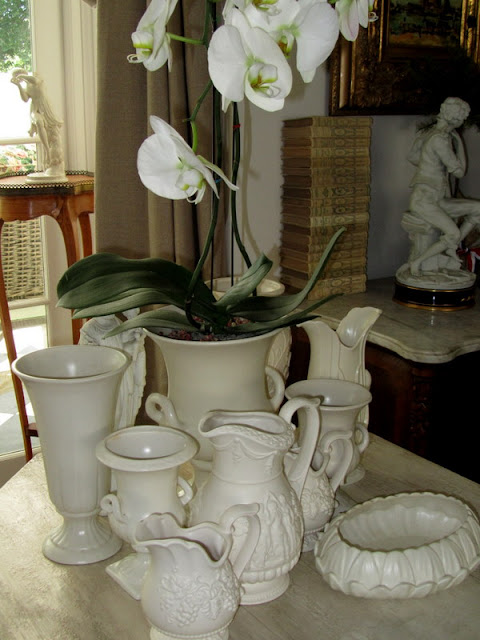 ps. Here in South Africa, in Afrikaans, the cycadas are known as "sonbesies"
when translated directly: "sun beetles"

by what name do you know them?
I would love to know.
Posted by La Brocanteuse at 2:05 AM

Green and white - a very refreshing combination sorely needed in this heat!! I did not know that cicadas lived for that long underground. How interesting! I love their singing. It is so reminiscent of a hot summer's day. x Sharon

Adore your collection of white vessels! In Summertime, as a little girl as dusk approached we could always hear the cicadas start their chirping!

We once lived in Nashville TN for a short (not short enough) time. It was the "bugy-est" place EVER! Mosquitos so bad you couldn't spend time outside without being covered in stings. Ants and spiders, roaches and beetles. The summer we lived there was the summer of the "100 year cycadas". It was so bad that you could not step anywhere without crunching them beneath your feet. Disgusting. the noise was so loud sleep was impossible. It lasted for some time and when it finally stopped, I was making plans to move back to the West coast and civilization.
I prefer to have them made of clay - much nicer!

Thank you Colette for visiting with a congrats to Christel.
You know my daughter also read over all the comments and said to me I hope the number ends up your South Africa friend, she loved your comments and knows I talk about you all the time when you visit along with your beautiful friends home and your beauty you create for your home and beach home life.

I am going to do another one in the summer so keep your eyes on it.
I was even prepaired to ship to you with that being said kepp posting those comments visit often when I do another one :)

Thank you for all your encouraging words to my art and design style it means a lot to me coming from you.
Lots of inspirational days.
xoxo
Dore

Hi Col. It's Sunday eve and I am stilllll steaming!! Phew... Fascinating to learn about these creatures that I also like to hear! I am so swooning over your pic of the cupboard which houses your magnificent collection of vases! Quite stunning! Thanks so much for your lovely visit. Have a great week and we need to make time for that get together with Sharon...

Colette, Your collection of white pottery is beautiful. I have never heard of Cicadas and I bet they wouldn't like it here in Virginia. We have snow and cold today.
Hugs, Sherry

Hi Colette, your white pottery collection is very lovely, I too have an affinity to white, and have collected milk glass over the years. The white orchid looks especially beautiful with it. When I hear the cicadas, I know summer is at its peak and soon fall will be upon us in Canada. However, I love their sound in the evening sitting in the garden..you are so right, what a wonderful world we live in! N.xo

Dear Colette, every one calls me Nel. Xoxo

Hi Col - my best memory of cicadas is in the Drakensberg in December (many childhood camping holidays) and we knew them as "Christmas beetles". Cath x

Yesterday, we took a leisurely drive along Main rd Hout Bay towards Constantia Nek and all along the way, the buzz of cicadas was most noticeable. A delightful Sunday afternoon interlude! One of the best sounds which remind me of my childhood summers

You have some gorgeous white vases Colette! As for the bugs they're known as cicadas here and signal a hot day for us as well. Interesting facts about them that I didn't know.

Beautiful collection of white.....! I too grew up with cicadas and we did call them locusts. I didn't like their noise as a child but living with them in the south of France as an adult, I find them oddly calming!

Colette, I sent you an email about featuring your home. I am looking forward to hearing from you.
xo, Sherry

The white vases and containers are so beautiful massed together. Fill them with greenery and your house will be amazing!
V

The cicadas on the Gulf Coast (Alabama, Mississippi, Louisiana) are referred to as cicadas and katydids. I have a large silver (cast) cicada necklace, and had an interesting discussion with security as I was leaving Paris last month. Quite often, my French vocabulary is lacking, but this one I knew!

Love those white vases. I would love to fill them with hydrangeas but will have to wait some months before we will have blooms! 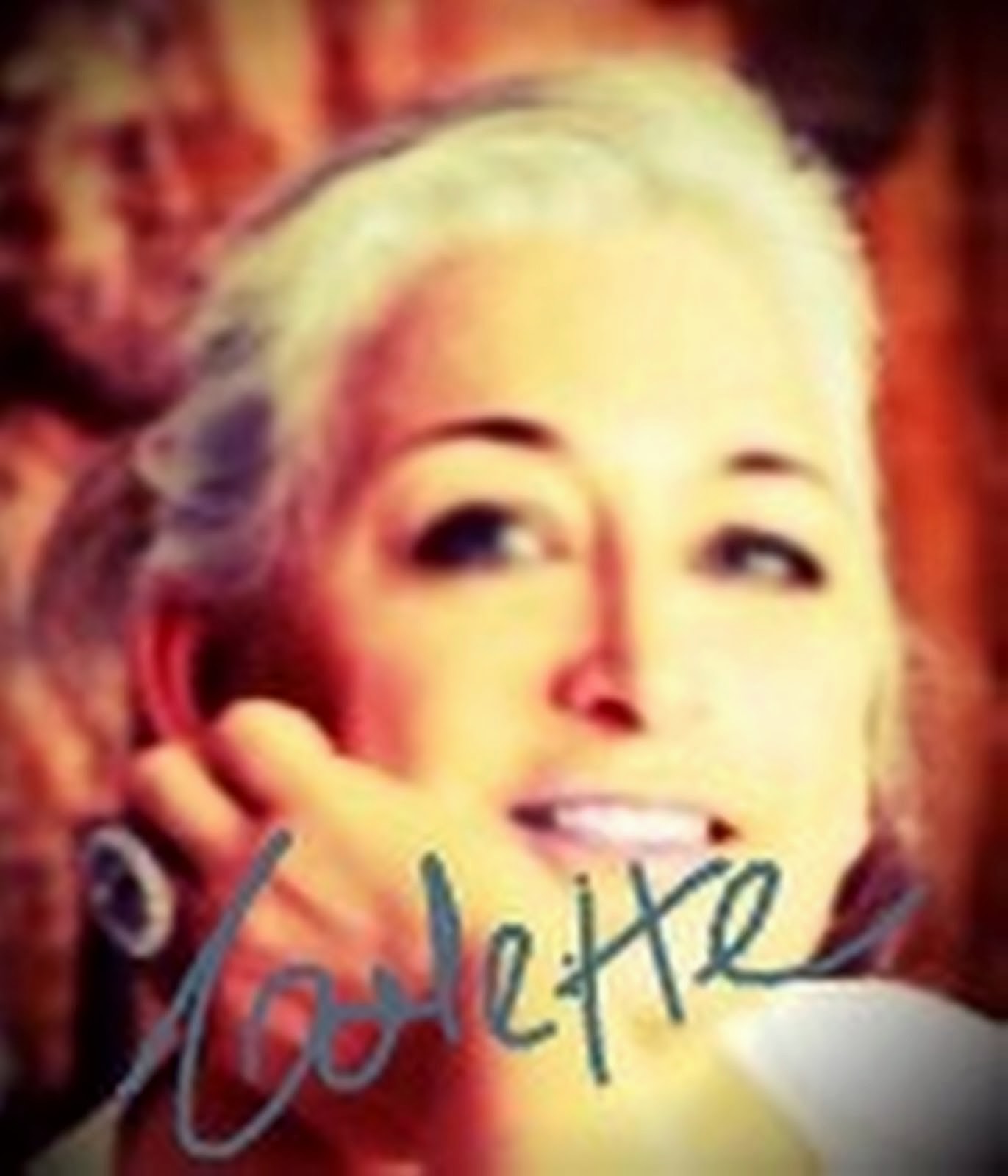 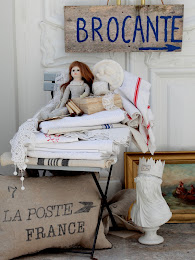 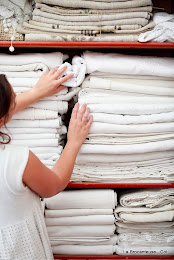 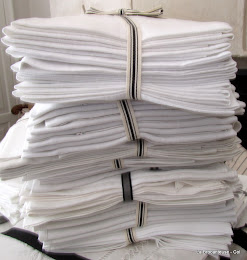 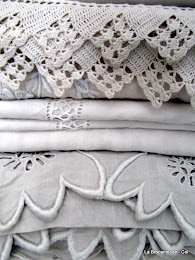 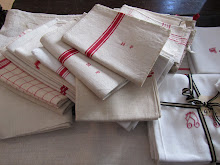 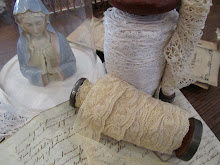 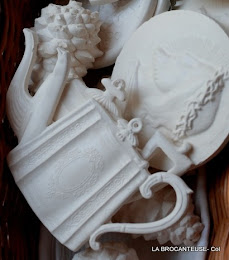 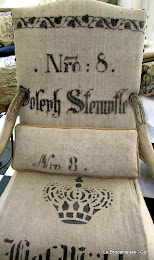 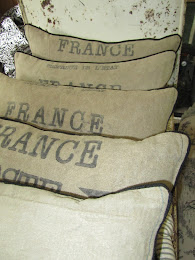 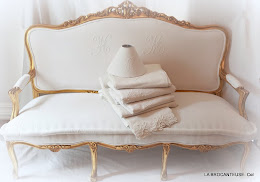 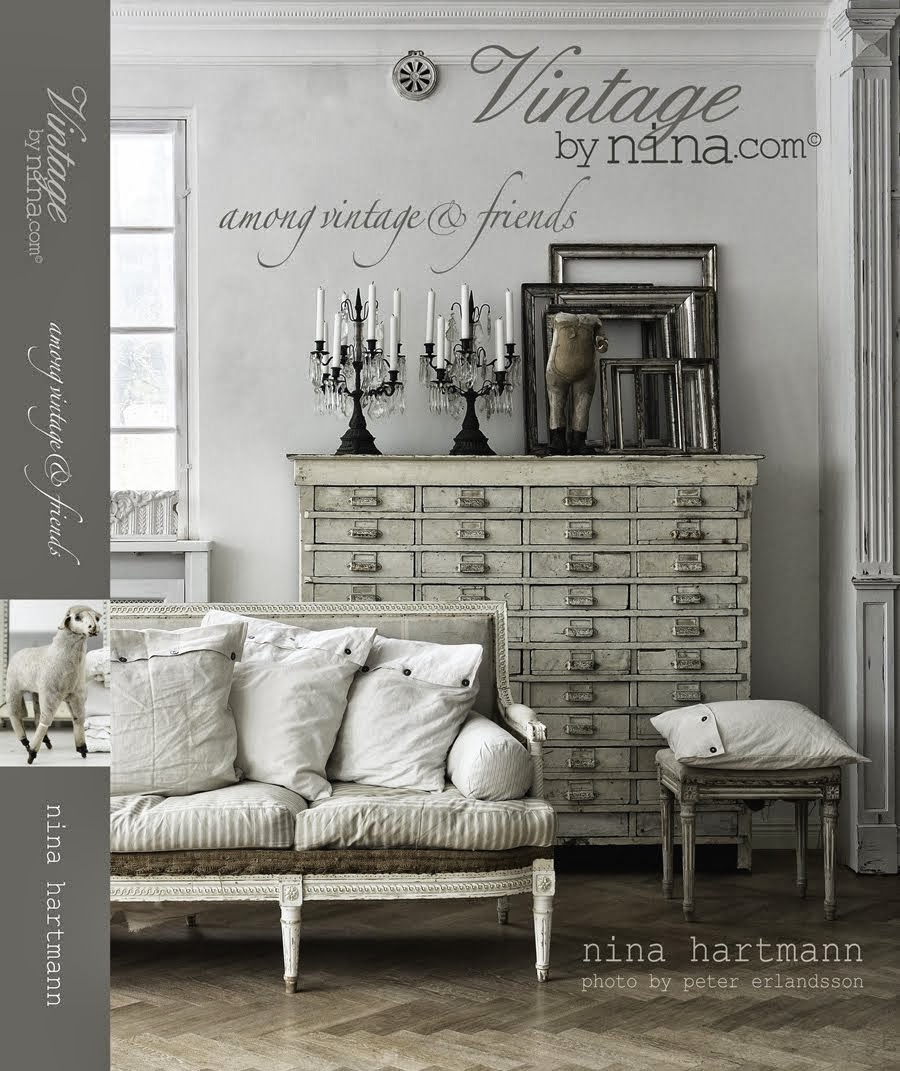 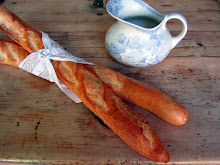 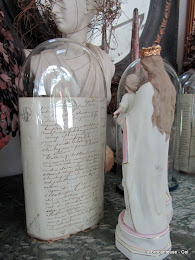 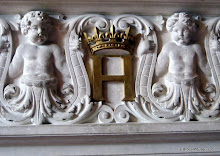